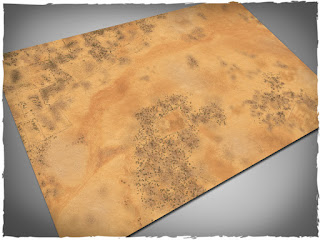 I'm thinking of saving up my pocket money for one of these 6'x4' Deep Cut Studios 6mm aerial desert terrain cloths, having seen one used to great effect on Nick's Bloody Betancourt blog. It's not cheap but I could use it for Desert Spitfires and Wings over Suez, as well as any other desert themed Wings at War projects. The obvious ones are the Six Day War and North Africa, the latter being a simple variation on the basic system in Desert Spitfires, with a few tweaks to give it some historical details. It could also be used for Target Locked On! and Airwar:C21 amongst other things, so there's a lot of mileage in it if I can stump up the funds. I better get saving up!