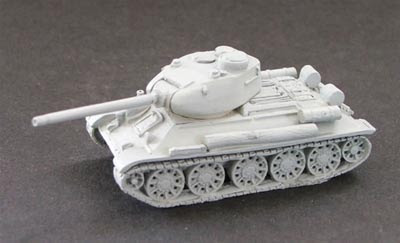 For my planned People's Popular Front army I needed a couple of extra tanks, just in case they popped up in the political phase as a bonus reinforcement. I have a couple of Peter Pig T-55's for the army already, so I was looking for a cheap pair of ex-Soviet tanks of some description. I was lucky enough to find a pack of three Command Decision T34/85's on eBay for a really good price, saving myself about five quid plus postage if I had bought them new.

I then found another pair for even less, which I also bid on and won, so I now have five brand new, un-used T34/85's with the cool late and post war 'full spider' pattern wheels, similar to the ones you find in photos from Mozambique and Angola. The whole lot cost be slightly over twenty quid, so I now have more than enough for the AK47 PPF project and spares for the Sandbox Skirmish project too. Excellent!