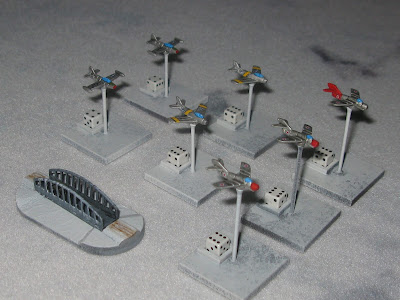 I am going to play my first game of MiG Alley tomorrow, having had all (?) of the aircraft and terrain completed but never actually getting round to using them! I have chosen a simple mission for the USAF which involves two experienced F-84 Thunderjet pilots bombing a bridge over the Yalu (I rolled a 6 for the target), escorted by two honcho F-86 Sabre pilots on top cover. The North Koreans have an experienced flight leader and two green MiG-15 pilots, whose job it is to intercept and shoot down the fighter bombers. I'm hoping that this will all be manageable enough for me as I'll be playing solo, unless the lad wants to join in as he's not at work tomorrow. If it all goes well, I'll have a follow on go with my Fleet Air Arm Sea Furies and Fireflies, which are painted to a better standard than the USAF models (I really should tart those up a bit?)