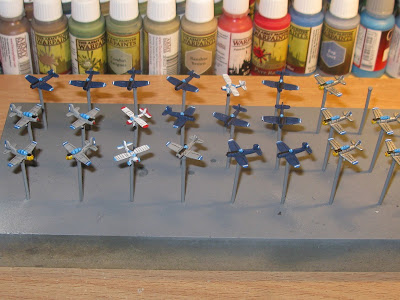 I've just finished the Honduran aircraft for the Corsairs and Cavaliers Wings at War project, with a coat of gloss varnish on the canopies just drying off now. They came out alright despite some headaches with the wing tip stripes and tail stripes, which weren't as difficult to do as I first thought. I still have the DC-3's to paint but they are identical to the FAS ones, so I'll do all four or five of them at the same time. I'm now going to move on to the Salvadoran aircraft, which should be a lot more interesting to paint due to their funky camouflage!