From our political correspondent in Mpangi

In a packed press conference today, the Zubuto Minister of Transport, Mr Phat k'Ntrola, announced the findings of a crack team of government surveyors and engineers tasked with investigating the mysterious disappearance of the Ndinga to Wanayani mainline. In a full report to the assembled press, Mr k'Ntrola issued a direct claim of railway daylight robbery, with the finger of blame pointed at militia groups aligned to the government of the People's Democratic Republic of Mbote:

'It is clear that criminal militia elements backed by the government of the so-called People's Democratic Republic of Mbote, no doubt with the approval of the corrupt and duplicitous President Papi Mpongo, have dismantled and stolen the railway belonging to the people of Zubuto!' 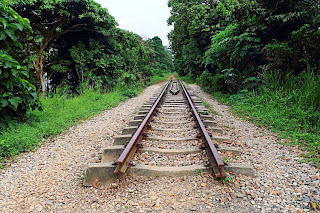 'The government and our armed forces, under the firm and resolute leadership of President for Life Dr Depe Dudu, will stop at nothing to reclaim the lost property of the state and return it to its rightful owners, the people of our glorious nation of Zubuto'!

In further news, it has been reported that regular units of the Zubuto Army of the People (ZAP) have been ordered to report to their barracks for immediate mobilisation. The missing railway line runs through the disputed border zone between Mbote and Zubuto, which has been sealed off by the Zubuto Internal Police (ZIP). So far there has been no response by the government of Mbote to the accusations made by the Zubuto regime.