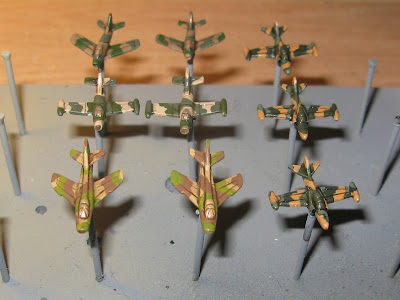 I have been back at work over the last couple of days, so progress has slowed on the 1/600th scale aircraft for the Corsairs and Cavaliers Football War project, including the extra jet fighters that I've added to the set up for some 1970's 'What If?' scenarios. These have now had the under surfaces painted in light grey, light blue or blue green, then been given a Future ink wash all over followed by a tidy up. I'm really pleased with the Israeli camouflage scheme on the FAH Dassault Super Mysteres and by the locally applied Vietnam style scheme on the FAS Dassault Ouragans. The FAS Fouga Magisters were originally going to be in all over brown but I've decided to replicate the scheme used on the Ouragans to make them more interesting. I've also got to tackle the FAS B-26 Invaders but I'm still working out how to go about it.