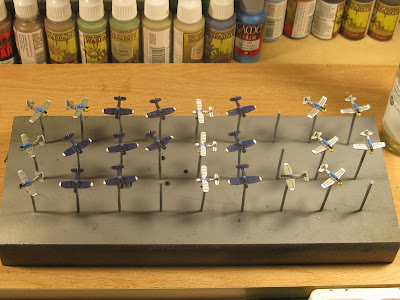 I've moved the Honduran aircraft along a bit today, adding the anti-dazzle black strips to the engine cowlings of the Corsairs, Trojan and Texans, as well as doing a bit of general tidying up afterwards. This was quite a fiddly job, as it's not easy to get a straight line or an equal spacing, but the next bit is even more fiddly as I have to add the blue insignia stripes to the tail planes and wing tips. I'm not looking forward to that but at least there are no decals!