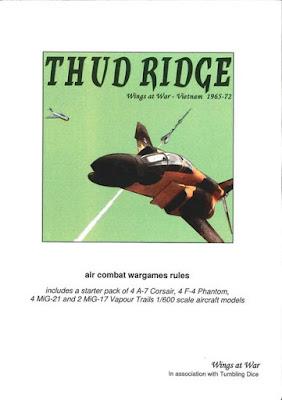 I've decided that the best way to be able to develop a Wings at War rule set for the Alto Cenepa War, is to have a go at either Thud Ridge or Flames Above the Falklands, both of which feature the mechanics for fast jet combat and missiles. I'd originally thought of doing a Falklands War project but that requires a lot more effort in terms of terrain and ground targets than Vietnam, so Thud Ridge is the obvious choice, especially as I already have a set of jungle flight stands and most of the aircraft models for both sides. I'm going to stick with USAF operations, as I don't fancy trying to replicate the USN paint schemes and I can also just use a basic grass terrain cloth, together with my existing ground targets. This project won't happen for a while yet, as I have lots of other things to do first, but I think it's a good idea and will enable me to learn the rules required for the Alto Cenepa game.