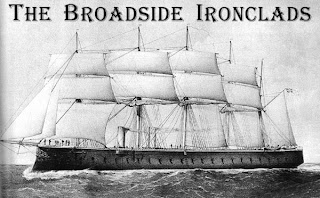 My wife had a bit of an accident this evening when she decided to tidy up my shelves in the garage because ' there's too much of your stuff' taking up valuable storage space.

Anyway, to cut a long story short, a plastic box containing my Skytrex 1/1200th scale French ironclads fell off the desk and ended up on the floor. The result was a tangled mess of masts and various broken spars which fortunately weren't rigged, as I hadn't plucked up the courage required to do them properly. I've un-bent the various bent bits and will re-paint the parts that need to be re-painted but...it got me thinking.

I have (yet another) box of Tumbling Dice ironclads in 1/2400 which have been waiting to be assembled and painted up after I aquired them in a bit of a Victorian naval moment last year. They're very good little models and would be quick to do up as they come with integral rigging, seperate sails and neat little sea bases, which cuts out a lot of the fiddly work. I've got both French and British fleets, plus some random Chilean, Peruvian and Prussian vessels for the period.

I'd planned to use them with Iron and Fire but have also considered using Sovereign Seas Lite, a board game that could be easily adapted to a hex cloth and miniatures, both of which I already have.

It's also a free download from the Bonegames site:

This could, as a result, be a possible project this year if I get my act together. It's another one to consider at the very least.