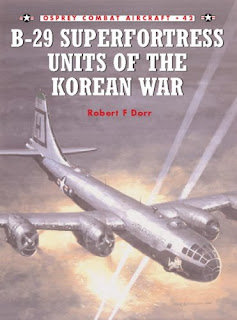 I have some reference stuff for superfortress units in Korea but it's a bit limited, as most books tend to focus on fighter operations rather than the tactical and/or strategic bombing aspects of the war, so I picked up this Osprey on Ebay to fill the gap.

Hopefully, it will be useful when I get around to assembling and painting up the eight B29's that I have for night bombing raids in MiG Alley. The TD models come in four parts, the fuselage, two wings and a tailplane, so there's a bit of gluing and fitting required but they should look good once they're done. I'm also going to try to put some nose art decals on them which are meant for 1/300th scal but should be OK for the B29's as they're pretty big even in 1/600th.
Posted by Jim Jackaman at 01:21