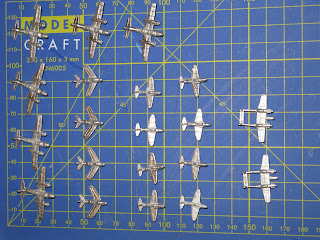 I finished off the USAF this evening with the exception of the B29's and the last four F86 Sabres, which I decided to skip so that I can save the magnets for the Fleet Air Arm or extra North Korean / Chinese aircraft. The lot I cleaned up and based today included the following:


The Twin Mustangs were a pain in the a%$* as I had file away a section of the centreline radar pod to get the magnets to fit but otherwise this lot went quite smoothly.


The nightfighters also got me thinking about what I can use for the 'bedcheck charlie' night nuisance attacks, which were made by Po2's and Yak 18's, neither of which are found in the Tumbling Dice range.


The Po2 is a non starter but I could find something to use for the Yak 18's. They look a little bit like a T6 Texan, only with a different wing profile and engine cowling but it might be possible to get something reasonably close with some judicicious sanding and filing, especially asI have four of them spare.