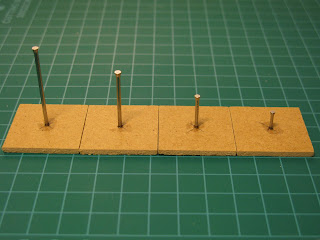 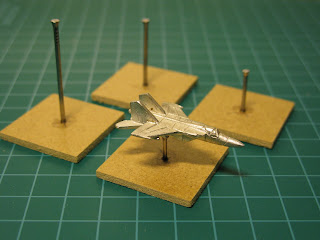 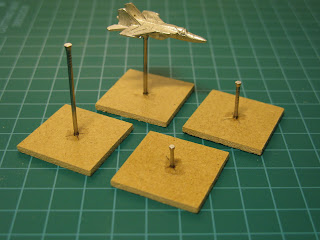 I managed to find some nice stainless steel panel pins today but only in 40mm, 30mm, 25mm, 20mm and 13mm. Nonethless, I've made some additional flight stand prototypes using each size apart from the 25mm which seemed to be too similar to either 20mm or 30mm to be useful.

I now have 4 flight levels although the 13mm one is very low, even if the MiG29 is quite big, and the 40mm one not particularly high. I think they look fine, so I'm going to make a load more as they are very simple and quick to produce.

I've also had a tip off about 50mm panel pins available from Wickes (thanks Jon) and, if I can get some of them I can use them for level 4 flight stands instead of the 40mm ones, which means the 13mm level 1 stands can be replaced by 20mm ones.