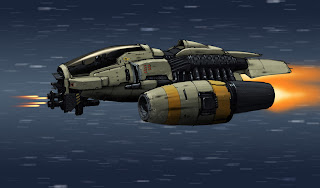 I promised my eldest son that I'd post his 100 word homework story on the blog, so here it is:

It was the middle of a space war between the deadly Harboon droids and the muscular Galactiar troopers. A Galactiar star defender was speeding to attack a Harboon battleship that was collecting meteor rocks near the rings of planet Harboona.

The four flashing laser blasters on the front of the powerful star defender were incinerating the fiery engines of the battleship.

The speeders were destroyed.

Not bad as he's only seven and wrote it himself, with a bit of help with spelling and composition.
A couple of weeks ago he painted up some em4 plastic space fighters, although they weren't finished off at the time. We're going to get them decalled and based for a game of Tacship between the Galactiar Legion and the Harboon droids when we get back from France, as it would be a shame not to follow up the story with some space fighter gaming.
Posted by Jim Jackaman at 10:52