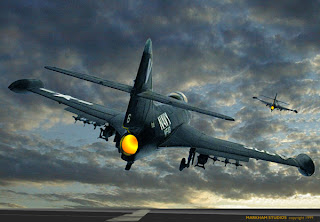 I've been planning out what I'm going to do for the MiG Alley project today and will be drawing up a list later on this evening to set out my forces for ther UN, North Koreans and Chinese. I have 100 tiddly magnets to use up so have lots of choices to make when it comes to using them.

This should be as good basis for the USAF and North Korean contingents.

After that I'm going to have just under 70 magnets left which I'll split between the USAF, USN / Marines, the South Koreans with perhaps a few Communist and Commonwealth aircraft squeezed in as well.

More on this later when I've checked the contents of the 1/600 scale aircraft boxes to see exactly what's avialable.
Posted by Jim Jackaman at 04:48