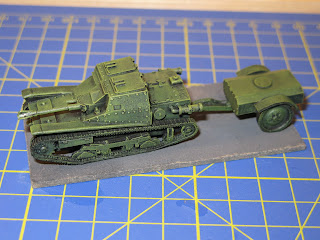 I painted the helmets, puttees and rifle stocks this evening to get the BUF figures about half way completed in the space of three days, all told. The helmets were painted in a 50:50 mix of GW Catachan Green and Camo Green, with a light highlight of the latter.

The puttees were quickly drybrushed in three stage Foundry Drab but could do with a little tidying up later on. The rifle stocks were painted in GW Dark Flesh and will get either a wash or a highlight later too.

After all this fiddly stuff I thought I'd paint a 'thing' rather than a bunch of figures so tackled the CV35 tankette with a big brush and three layers of Foundry Phlegm Green. I quite like the end result so will do the same with the BUF flying column lorries and vans. The tracks and little details of the tankette still need to be picked out but otherwise it's pretty much done.

Next up will be the boots, hair and gun barrels of the infantry together with the Vickers tripod and gun.
Posted by Jim Jackaman at 21:30