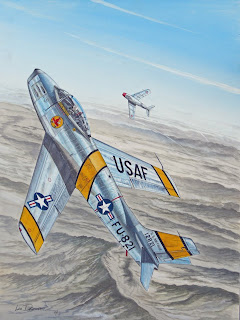 I've had a look at the contents of the boxes of Tumbling Dice planes I have collected for MiG Alley and have decided to start with the USAF, followed closely by the USN and Marines.

I've already decided on 16 Sabres as a starting point but will also be adding the following to round out the Air Force presence in the skies of North Korea:

This should give me plenty of scope for different types of mission and form the basis of most of the games I'll start to play.
Posted by Jim Jackaman at 12:16