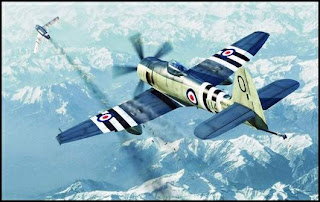 I've checked the contents of the bits box and have set aside twenty magnets for the following RAAF and FAA aircraft:

I'm a bit worried about the invasion stripes but otherwise these will be a nice addition to the UN forces I've assembled so far. The remaining twenty magnets I have left over will be used for some of the USN / USMC aircraft that I had planned to do.
Posted by Jim Jackaman at 05:57